Robert Gamez has a life exemption because he won the tournament many years ago. On Friday his score was 92 and he did not sign his score card. The penalty is Disqualification. On the PGA Tour web site, even if he was DQ, we can see his score on the leaderboard.

Ball in a divot

On the last hole of the last day, Lee Westwood was one stroke behind DeChambeau. His 300 yards drive ended up in a sand divot. He did not argue and played his shot. Westwood is a very good guy and he always accepts bad luck.


This issue is something that players talk very often. Is it fair to have a drive in the middle of the fairway to see it stop in a divot hole without the possibility of having a free relief?

BALL IN A TREE 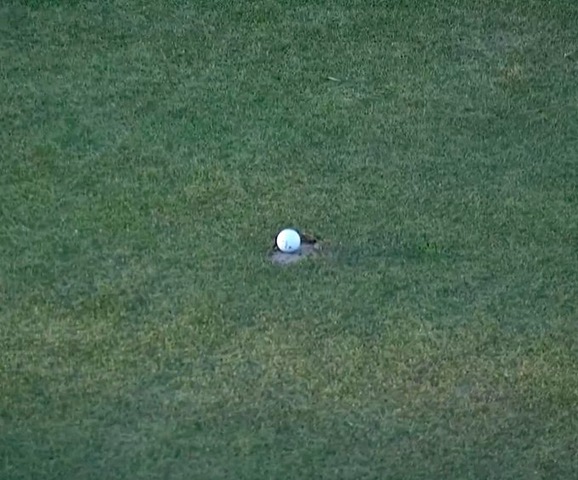 In the same tournament, Jason Day sent his ball in a tree. He was not able to identify his ball. A photograph used his camera lens to properly identify the Day’s ball. It was also seen that his ball was lying in a bird nest. Day took an unplayable relief with a penalty of one stroke.

Here a few rules to know when a ball is unplayable:

Identification of the ball

If a player can’t identify his ball, the only option available is Stroke and Distance. But he can identify with any means. Even if a rangefinder is not permitted on the PGA Tour, a player could use it to identify his ball. If it is his ball he may use the back on the line option or within 2 club-length from a spot on the ground under the actual position of the ball.

Usually when a player’s ball is very close to a birds nest, he must take relief without penalty at no more than one club-length from a safe spot.

WHY DIDN’T HE GET A FREE RELIEF?

In order to be granted a free relief, the ball must be in a playable position. Day’s ball was unplayable.

At The Players: an honest mother and a few other rulings