Before the last day of the Ryder Cup, someone called the Committee to tell them that the American Harris English was using a non-conforming putter. We don’t know if it was someone from the European team or a spectator.

We can see on the picture that some tape or part of the white tape is loose on the top end of the grip.

When something happens to the equipment during a round, we may continue to play with that club until the end of the round even if the damage makes the club non-conforming. But we cannot start a new round with the club in that condition.

To find out if that putter was still conforming before the start of the last day, we must look at the Equipment Rules:

IF a certain feature on the grip enables the player to place his or her hands in exactly the same position every time, solely by feel, then it must be determined whether that feature renders the grip “molded for the hands”. 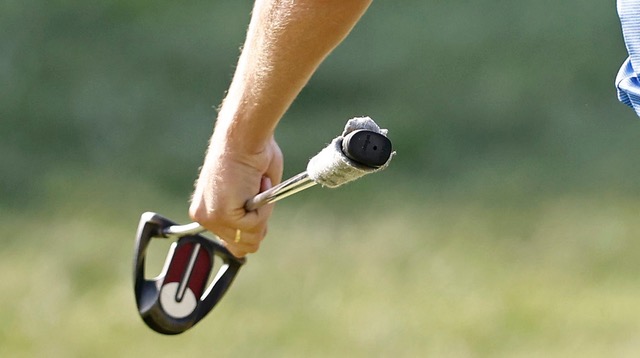 It was ruled that the club was not conforming, the player must not start a new round with the same club.

It took 30 seconds to Davis Love, one of the team’s staff members to correct the grip by putting more tape around the damaged part. English used that putter for the singles match.

Sometimes we might think that the rules are exaggerated, and it should be made easier. We must never forget that without Rules, more money would be spent in Research and Development, and it would be a circus with new features each week on Tour.

Answers to questions on rule 12: bunkers