Here are the answers from last week questions:

– The day of a tournament, a player calls the Committee to tell them he will not be at the first tee. The Committee disqualifies him. Because of heavy rain and winds, the Committee decides at the end of the day to cancel the round and the new start will be the next morning.

A) The player is still disqualified because he did not show up.

B) The Committee may waive all penalties except a Disqualification penalty.

C) The player may play the next day but with a penalty of 2 strokes.

D) The player is not disqualified, and he may play the next day.

D) THE PLAYER IS NOT DISQUALIFIED, AND HE MAY PLAY THE NEXT DAY


As explained indirectly by the Interpretation 1.3c/1, A player is not disqualified from a competition when the round does not count. In the Rules of golf, some guidance is given to Committees. Under Committee Procedures 6E, when a round is cancelled, all penalties are cancelled. But if a player had a disqualification penalty for a serous breach of the Code of Conduct, the DQ will stand. 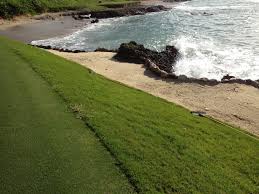 – Two players are in a playoff in a Stroke Play competition. On the green, Player A concedes the tournament to Player B. Both players pick up the ball and do not complete the hole. When they are back at the Clubhouse, a referee is requested to make the ruling

A) Both players are disqualified because they did not put the ball in the hole.

B) A player is always allowed to concede victory in a Playoff.

C) The referee will have the two players go back to complete the hole.

D) It is possible to concede the next stroke because in a Stroke Play Playoff, the rules of Match Play are in effect.

– A ball lies in a bunker touching also a red line (penalty area) and the player can’t play the stroke because it is in an unplayable lie. What are the player’s options?

A) The player must use the available options for an unplayable ball in a bunker.

B) The players must use the options for a ball in a penalty area.

C) The player has the choice between the bunker or penalty area relief options.

D) The only option is to use the Stroke and distance (going back to where the previous stroke was made).

– The ball lies in the general area near a flower bed that has been designated as a No Play Zone. He knows that his club will touch the flowers during his backswing, but he decides to play the ball where it lies. What is the ruling?

A) No penalty because the flower bed is an abnormal course condition where free relief is available.

B) No penalty because the ball was not in the flower bed.

C) A penalty of two strokes because his club touched the flowers.

D) Penalty only if it is included in a Code of Conduct.

Start of the season and temporary greens

Concession of a putt in match play