Disqualification for a late arrival and bad weather…

Last week, we had the Bromont Invitational at Chateau Bromont, and the Rules Committee was quite busy. Pros and Amateurs, both men and women were competing for a very interesting purse.

The first two rounds had starting times with a cross over in the morning and another one in the afternoon. On the second day, the morning wave had good weather, but rain and wind made the afternoon tough for players. We had to finish the second round the next day. The third round was scheduled for 11H30 after the cut and players were informed by email.

Here are the two incidents related to the weather that got players disqualified:

PLAYERS START A HOLE AFTER THE ALARM

There is one basic rule regarding alarms (3 short blasts or a long one) because of bad weather. After the alarm, it is never possible to start a new hole. This is a rule every golfer should know.

THE FACTS: 3 players make their tee shot on hole # 8. The referee tells them that he will sound the alarm shortly and they may complete the hole after hearing the alarm. The players were near the 8th green when the alarm was heard. The referee then went away to monitor the other holes. The 3 players finished their hole and went to play the 9th hole at least 2 minutes after the horn. 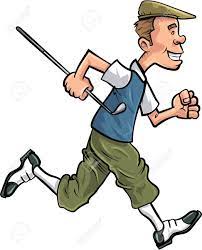 THE DECISION: This Rule is very clear, and players are never allowed to start a new hole when play is stopped. The only time we would give the benefit of the doubt to players is when they are very far away on the golf course, and they say they did not hear the alarm. But those 3 players were not more than 125 yards away. They were disqualified.

ARRIVING LATE AT THE TEE

A few minutes before his tee time, a player calls us to say he will probably be late for his starting time. We told him that he will have a penalty of 2 strokes if he arrives late and not more than 5 minutes. He arrives at the golf course 30 seconds before the 5 minutes. The player is not on the tee, ready to start, he is disqualified.

This is what the player could have done to avoid the disqualification:

· Take a club and a ball

· Run to the first tee

· Be ready to play before the 5 minutes mark.

The penalty would have been 2 strokes. Then the player would have continued play of the hole or round with that club until someone brings him the rest of his bag. All of this must be made without any delay.

When a player is late, the other players must start and play the hole without waiting for the player that is late.

OTHER DECISIONS DURING THE TOURNAMENT:

QUESTION 1: We were under the Preferred Lies local rule. A player finds her ball on the fringe of the green. She picks up the ball, cleans it at places the ball not nearer the hole. She then went to look at her line of putt and at that moment the ball moves a few feet closer to the hole (there was a slope).

QUESTION 2: The player hits her shot very low, the ball bounces on a root and ended in a tree. The other players saw the ball hit the tree, but nobody saw the ball fall on the ground.

The Masters and the Rules of Golf