This year we had a lot of decisions during the PGA Championship. I have noted a few of them:

The PGA of America decided to consider all sandy areas as part of the general area instead of being bunkers. These are the implications of that decision:

1. The players may ground the club on the sand before making the stroke


2. The players are not allowed to remove any sand near the ball

3. It is allowed to make practice swings in the sand

4. No free relief for an embedded ball in any sandy area. 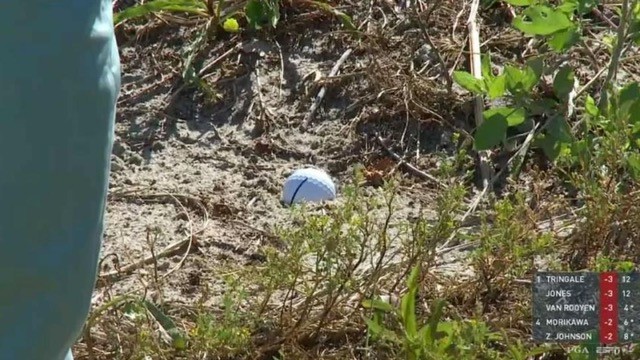 Under the PGA Championship Local rules, the only free relief from a cart path is when the path is covered with asphalt or cement.

The player received a warning when he took 74 seconds to make a stroke on a hole. Later in the round he was penalized for a second breach, one stroke for taking 63 seconds. The goal was set up at 40 seconds.

On hole # 10, the player signed for a 4 and he had made a 5. The score card was returned with the wrong score on the hole. The player was disqualified.

His third shot (270 yards from the green) went in long grass near the green. The forecaddie found a ball with the same company logo on it. The ball was played and then the player found out it was not his ball. The penalty is 2 strokes for playing a wrong ball. He had to correct the mistake but did not find his original ball. The had to go back to 270 yards away with another penalty stroke for a lost ball.

After sending his ball in the penalty area, the player was very angry. He broke a tee marker and hit the ground several with his club. Under the Tournament Code of conduct, the player was fined.

With 190 yards between his ball and the flag, the player asked an official to have a drone in the air moved because he was afraid it would interfere with his ball flight. 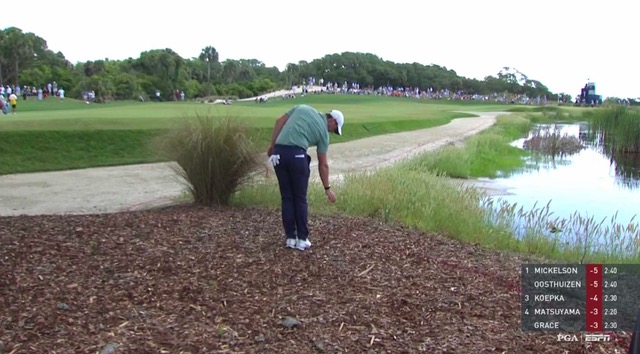 Mickelson marked his ball that was very close to Oosthuizen’s ball in a waste bunker. After the stroke, Phil put back the ball in position and asked if could keep the modified lie. The referee told him he had to restore it like it was before he picked up the ball even if his lie was better than before.

DROPPING A BALL ON THE GREEN (Phil Mickelson)

When a ball is in a penalty area, and the relief area is on a green, the player must still drop a ball instead of placing it.

When a spectator moves a ball, the player must place the ball in the exact place. If that spot must be estimated, the player must still place it instead of dropping it, anywhere on the course.

A player found his ball embedded in sand. Under the Rules of golf, a player does not get a free relief when his ball is embedded in a sandy area.

Lost ball or ball out of bonds